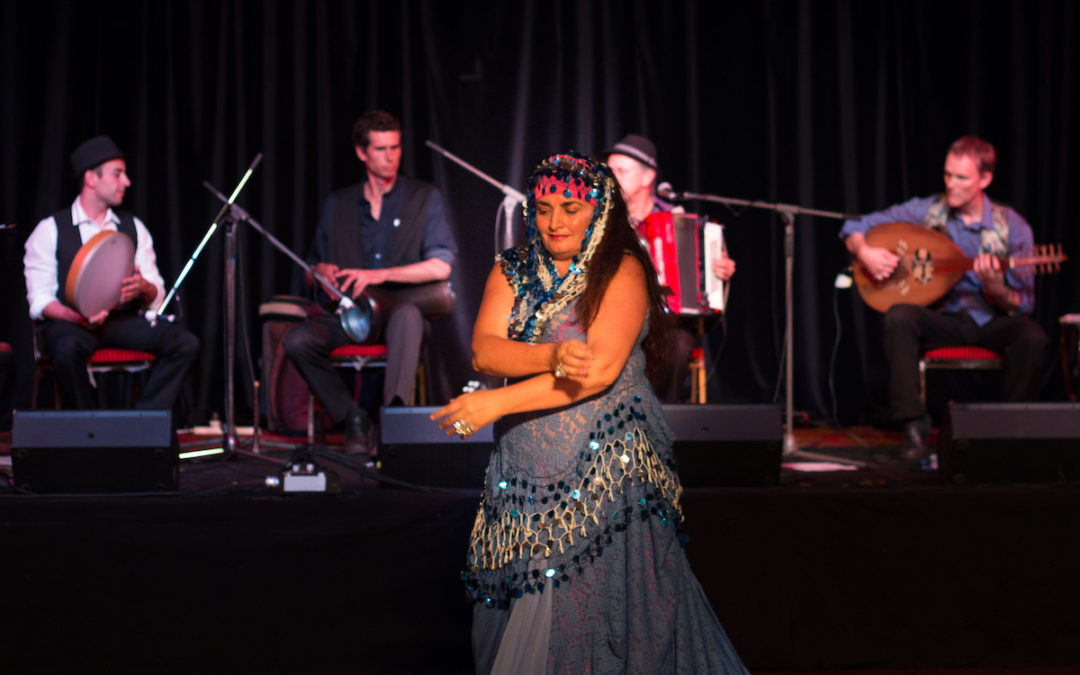 A couple of months ago I went to a 50th birthday party for Phil Carroll from our band Yalla. Everyone from the band was present, and although we seldom play as Yalla anymore, all the magic was still there – the magic of being in the moment, of being a part of something bigger than yourself. You are in a group that creates a musical energy field that is always different. You can play the same tune 500 times, but it never gets boring because it is never the same. And because you know it so well, it can become transcendent.

My story with live music began in the early 90ʼs. On returning from a year overseas, I met Ann Harkin, one the few female percussionists at the time, and we began working together as a dance-drum duo. Around that time, Anne began teaching Middle Eastern percussion, and Anita Larkin, a very talented drummer, was one of her students. Anita and Anne soon began working together, and started a club called “Club O”, which met in a community hall in North Fitzroy, and we also did lot a busking around the City, in Fitzroy and Carlton – wherever we could. In 1995, Phil Carroll joined us, and Taʼesh Faʼesh was formed. “Taʼesh Faʼesh” means “clap your hands and play zills”. Taʼesh Faʼesh also made a tape (back in the era before CDʼs and mobile phones!) which some of you may own. Club O expanded to become Club al Sharqi, which was about welcoming and embracing all dancers and anyone who was playing middle-Eastern-inspired music, and other, world music genres. We also played at local festivals and events, and at the Boite World Music Cafe.

Taʼesh Faʼesh disbanded in 1997. Our last gig at my production of the Hossam Ramzy concert at a venue called Budinskiʼs Theater of the Exile, in Smith St, Fitzroy. You could say that that was the night the seed for Yalla was planted, and a few months later, Phil Carroll and I went on to form Yalla, along with Andrew Khulmann and Phil Gunter, and later Ernie Grunner and Michael Kontochristos. Around the same time, Anne and Anita formed Short Circuit.

My role in Yalla was primarily that of a dancer, but when I wasn’t dancing, I was a backing percussionist and singer. I was completely immersed in all the activities of the band, and I was just as much a part of the rehearsals as everyone else, as well as part of the management. I knew the songs that we played, inside out. I knew how the percussion parts went, and what rhyme

went where, including all the nuances, both melodic or percussive, that gave the tune its unique characteristics. I listened with a dancerʼs ear, and I knew how the songs needed to be played from a dancerʼs point of view, so it was very important for me to be a part of the rehearsals.

Although I was unable to play the wonderful complex rhythms that were played by the lead percussionists, each with their own particular interpretation, I knew the bones of the percussion, the basic rhythm, and I knew when it changed from one rhythm to another and back again, colouring the melody. Although many percussionists might disagree, I feel that the percussion needs to predominantly follow the melody, and always be in relationship with it. Too many times, percussionists run away from the meaning of the tune. We worked hard on that in Yalla, and I helped the percussionists to stay with it. Sometimes I would dance it, sometimes play it, helping to create a marriage between melody and rhythm.

My job then was to be the person in front, interpreting the music through the dance, but really it was more than that. The melody makers were involved in the melody, and were happy as long as the percussion was at the right time, 4/4, 2/4, 3/4 etc,. However, through my understanding of a tune, I would know that this was not the case. For instance, in “Betwasis Beek”, you have to begin with Double Dum, Baladi Macsoum, and not the basic Dum Tek Macsoum, or the whole tune will lose its meaning. So I was constantly dancing, physically or in my imagination, and “feeling” the song, getting the marriage to be a good one for all concerned. This was an exciting process for me, and each rehearsal was more like a gig, really, played every week around my kitchen table. I fondly miss those days.

Many people have told me over the years how lucky I was to have a band. Indeed I was lucky, and I loved being a part of the group very much, but I never felt that I “had a band”; I was a part of the group, and my job was to express and interpret the music so that a receptive audience would hear the music through the dance. Dancing to live music is risky, because you never know what is going to happen. You may have your choreography tight and on the beat, but sometimes you go out there and the band gets the tune wrong! Thatʼs fine when you are soloing because you can go with it and improvise, which is really my forte. But when there is a group, and choreography, it is not so easy to improvise, and unfortunately the dancers are the ones that look like they have got it wrong! This happened at our 10th anniversary. One of our guest musicians was not familiar with the tune and went into another part. We, the dancers, had to pull ourselves together as best we could, keep smiling and get on with the show. At times like this, performance can be disappointing, but mostly there are wonderful, joyful, satisfying, moments

such as when the whole band is in sync, and it flows like honey. For me my joy would often come when dancing to “A night at Katcouta”, our Ashra Baladi piece. The dynamics of Phil on the accordion or ney, and Andrew (one of the best baladi improvisers around) on percussion, produced a rich melody, and when their call and answer was so flowing and intuitive and I could rest into it and trust it fully, my dance became a prayer, being in that moment, when everything just works. When we recorded our self titled CD in 2000 I danced in the studio for the recording of this track so it would have more meaning. When the dance, the melody, and the beat are one, where there is a dialogue, a poetic union, this is the magic of working with live music, which recorded music cannot give. It touches my heart so deeply.

Recorded music has advantages but, it lacks the human element of the unknown, so you donʼt have to deal with trust, and you know that it will not change. But the magic lies in that trust, knowing that it may fail, but (mostly!) it doesnʼt!

In those two decades, I worked all over this country, at major and minor festivals, tours, events, and good and bad functions. I am part of a community of world and folk music, and of course, the community of bellydance. I have been the wall paper, the token “exotic middle-eastern band” in the foyer of big hotels, and I have been on stages in front of thousands of people in the audience. Once I commanded the whole of the local farming audience of a small rural community to stand up and dance and they did! That was a memorable moment!

At the Maldon Folk Festival, we did our Ghawazi entrance into the wine bar tent on a very cold night. The Mizmar began and I let out a zargareet and the Davul came in with my zills and the other percussion. We began to move up the hill, me doing a half-Egyptian walk at a nice, steady pace, all in the moon light. Usually I would have been at the front, with Phil next , or me and Phil together, with everyone else following, but this time we organically became a wall, all in a line together, keeping the same pace, and it felt so strong and powerful, and it has stuck in my mind every since.

We also formed the Sanctuary Ensemble to play devotional music, dance and sing and recite Rumi, one of our favorite poets. What a highlight in my life that was.

These moments I will cherish forever, but it is not over. Even though I am leaving this country for a while, I know that there will be another opportunity at another party, and we will play again and again and again.

If you would like to experience dancing with any aspect of live music, I am still available for tuition, along with the musician/s of your choice, in a private or group lesson.

The Yalla CD is available through my website: http://www.dancingisis.com