Embodying a Dance by Trisnasari Fraser 2010 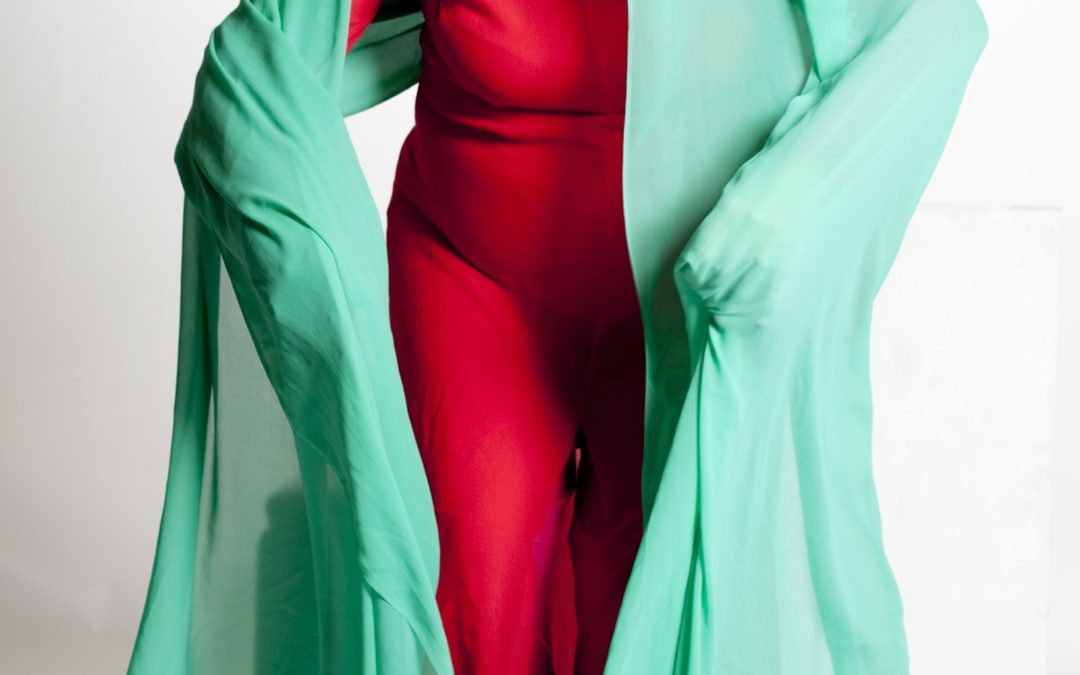 Trinsa Fraser, is the founder of Underbellydance, Melbourne, she is a dancer, choreographer and freelance writer.

Anyone who has tried getting belly dance into the mainstream media knows all the puns – “navel gazing”, “hippy hippy shake”, “belly dancers shake it up”…

It is only as you peel back the layers that you see so much more than sexy two piece costumes and well timed wiggles. It is what lies beyond the flesh and sparkles that makes the difference between a passing fad and lifelong love affair with this beautiful dance form.

Many women have felt the calling to make this dance a vocation. One of those chosen by the dance is Maria Sangiorgi.

Maria was born in Coonawarra, the hub of the wine growing region of South East South Australia, to Italian migrants. A conservative Catholic upbringing did nothing to quell a free spirit and she was drawn to other artistic people – misspending her young adult life in the company of Melbourne’s bohemians including Vali Myers and the Skippers of Monsalvat. A muse to many artists, an artist herself, a poet, and a healer – she felt a calling to all of these – but none as strongly as the feeling of homecoming she experienced when she discovered Middle Eastern dance in the late ‘80s.

Maria has had many teachers and influences. Amongst her biggest influences are Fifi Abdou, Souheir Zaki, Naima Akef and Suraya Hilal. It was these influences and a deep intuition that she brought to her first forays into teaching.

“When I began to teach Egyptian dance sometimes it felt like my voice was coming from outside of me and it was speaking knowledge that I didn’t even realise I had! But it was right to me – it made sense.”

Since those early days Maria’s inquiring mind has led her on many journeys. She continued to explore Middle Eastern dance and music, including performing with Middle Eastern band “Yalla” for many years. Alongside dance she pursued a range of movement disciplines including Body Mind Centring, Alexander Technique, Ideokinesis, Yoga and Pilates. In addition to informal studies, she has gained numerous formal qualifications in training, massage and healing. She is currently undertaking an Advanced Diploma in Dance Movement Therapy with the Institute of Dance Movement Therapy in Australia. As a Certified Dance Movement Therapist she works with Disability groups including physical and intellectual disabilities, mental illness, women in prison and the elderly with dementia and Alzheimer’s.

An important influence on her approach was a group of dancers that met weekly for five years at Dancehouse in Melbourne, with Jane Refshauge, a teacher of Alexander Technique. “I was surprised to learn how complex the Raqs Sharqi dance form is.” Jane says, “I’d been teaching at the Victorian College of the Arts School of Dance and was very familiar with the demands of classical ballet upon the body. I was taken aback to discover that Egyptian dance was even more demanding than ballet, as it requires the classical axial form to be maintained, whilst spiraling around the very same axis. There is no room for error. One cannot ‘cheat’ or overuse muscles to ‘hold’ a position. The spherical dynamics of the form will not allow this. The dancer needs to be truly in balance, otherwise the spiraling movements cannot occur.”

Of Maria’s approach, Jane says, “Maria has always initiated explorative learning environments. Her creativity is limitless and her capacity to refine and deepen the simplicity of learning unparalleled in the teaching of dance and movement.”

Maria sees this dance as subtle and organic, with movements flowing from one to the other. “This is how I teach my students. I want them to discover their dance by knowing first their bodies, and then by letting the dance happen. I don’t call things a lift or a shift or a flick because if I do, that is what they become and that is what they look like – all on the outside and nothing happening internally or emotionally. ‘Action follows thought’. By knowing and visualising the mechanics of movement anatomically we can follow it physically.”

It is challenging work for students and teacher alike. As part of Maria’s Embodied Bellydance™ workshops, a range of feedback is collected about the process. “How did it feel to explore the breath?” Participants note “my spine felt like it was lengthening” or “ I felt light-headed” or “I feel more energetic”. Maria also participates in this part of the process. Her feedback reveals the courage it takes to stay true to aspects of her approach while constantly learning and evolving herself, “I need to honour that my work takes time and to pace myself better than I did at the first session” and “I need to keep a better eye on the time so that I don’t waffle but still present the content in a meaningful way”.

For many fortunate dancers the challenge pays off.

After a recent visit to Alice Springs, Zada of Shimmering Sands said “Maria’s knowledge of anatomy and how the body works informs her extraordinary, effective and transformative bodywork.  After her Embodied Bellydance™ workshop, all the participants were moving more naturally and gracefully, inhabiting their bodies, and loving it.”

Renate van Dordrecht of Bellydance WA recently attended Maria’s 4 day intensive in Melbourne. “Embodied Bellydance™ is more than just dance steps and choreography to music.  It’s about being fully present, giving all our attention to the sounds that inspire us and experimenting with the different ways our body can move, all in the wonderful framework that is Egyptian Baladi. Maria’s skill in ensuring everyone feels safe and comfortable to explore new ideas and her dedication to research and study, can be witnessed in the transformation of dancers who attend her workshops. I came away not with another new choreography, but a greater, deeper connection to the music and the dance.”

Nyree Walsh, a Raqs Sharqi dancer from Canberra attended the same intensive. “Maria is an inspiration,” she says. Her feedback throughout the workshop revealed her deep exploration of the form. She notes, “I explored and enjoyed the feeling of my spine and navel in unison” and “I lost myself in the great feeling of my spine unfolding verterbrae at a time.”

Cindy Hyde of Goddess Bellydance, Melbourne, says “I was already six years into my belly dance journey when I participated in Maria’s Summer School in 2006. Her Embodiment work and way of approaching the dance was like nothing I had been taught before.

I wanted more than just the five days at summer school so I started weekly classes and was a member of her “Daughters of Isis” troupe in 2007.

Maria’s work is amazing. It’s opened up a whole new way of looking at Belly dance for me – anatomy, body awareness and the embodiment of the dance takes it to a whole new level, beyond just the physical.

I have learnt to be connected to myself fully and authentically. This creates such a freedom within the dance that you can rarely find anywhere else.”

Cassandra Longley, one of Maria’s students who also attends classes with Melusina and Kajal (Bollywood/Classical Indian) says, “Maria’s classes have given me the foundation and grounding to be able to learn from other people. Her style of teaching is like no one else.”

Maria’s focus through Embodied Bellydance™ is on the foundations of movement and expression, rather than a specific style or dance vocabulary. It is testament to the success of her teaching that belly dancers of so many genres – from Raqs Sharqi to Oriental to Tribal Fusion – have benefited from her approach.

Maria believes strongly that Traditional Egyptian Dance is a starting point that will support any other Middle Eastern dance style. In particular she gravitates to Baladi. “Baladi is one of the most evocative styles of Egyptian music and dance.

It calls up the mystery of Egypt combining the ancient past with not so long ago sounds of Mohamed Ali Street, where this style of music and dance began around the turn of the 20th century.

It was born out of Traditional Folk/Shaabi music and dance that we can still see and hear from the famous Musicians of the Nile and the few remaining Ghawazee dancers.

Baladi is the blues of Egyptian music and like the American Blues, Greek Rembetika and Spanish Flamenco was born out of migrations and loss of place amongst other things.”

Maria’s own feeling of loss of place was healed in a recent stay in Egypt where she felt a deep spiritual connection to both the Egypt of the ancients during visits to temples of Isis and to the Egyptian people today – one family accepting her as a surrogate sister!

She hopes to return to Egypt soon to continue exploring what is no doubt another spiralling tangent to Maria’s ‘eclectic life’.

“I’ve had quite an eclectic, not very ordinary lifestyle, compared to the norm. Whatever the norm is. My focus has always been on the creative and no matter how hard I try to put away the washing or the dishes or sweep the floor, it is my creative life, which I am blessed to say is how I make my living, that always comes first.”

“I have a teaching curriculum with a linear structure, but I allow my lines to curve somewhere along the way, then they grow other lines that end in spirals. And why not, this is a dance based on spirals after all. Accepting and allowing things to happen in cycles is not easy.  Let the movement find its way, organically, naturally.  Let the dance be, without the teacher getting in the way. To allow the natural grace of our body to happen.  After all, dance, like any other art form, is intuitive, inspirational.”

For more information about Embodied Bellydance™ or to organise a workshop visit www.embodiedbellydance.com